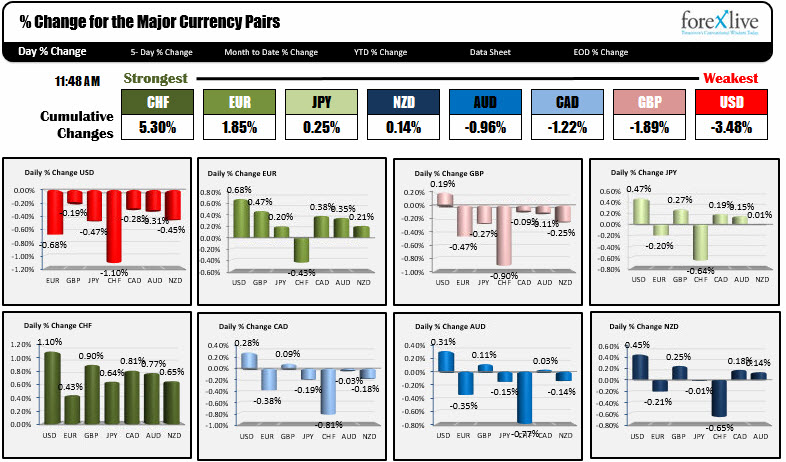 The snapshot of other financial markets is showing:

The markets had a wild ride today with two events providing the catalyst.

In the morning, the ECB kept rates unchanged but the market did not jump on anything Draghi said as being too bearish for the currency.  He did say he had “additional concern over unwanted tightening of US monetary policy” and “based on today’s data there is little chance at all that the ECB interest rates will be raise this year”.   He also said that FX rates were a risk to the recovery.

The market did not bite, and the EURUSD led the way to the upside, and that – once again –  dragged the US dollar lower.  At the US midday, the dollar was the weakest of the major pairs while the CHF and the EUR were the strongest.

The run lower in the dollar took the major currency pairs through key levels.

Then President Trump, over in Davos Switzerland, in an exclusive interview on CNBC, back tracked some of the bearish dollar comments from Treasury Secretary Mnuchin (does that guy know what he is talking about?), by saying the dollar was to go higher on the back of the strong US economy.

Fast break the other way.

The end of day snapshot shows a different picture for the fortunes of the dollar. Instead of being lower and down against all the major currency pairs, it ended the day up or near unchanged vs. all the major pairs. 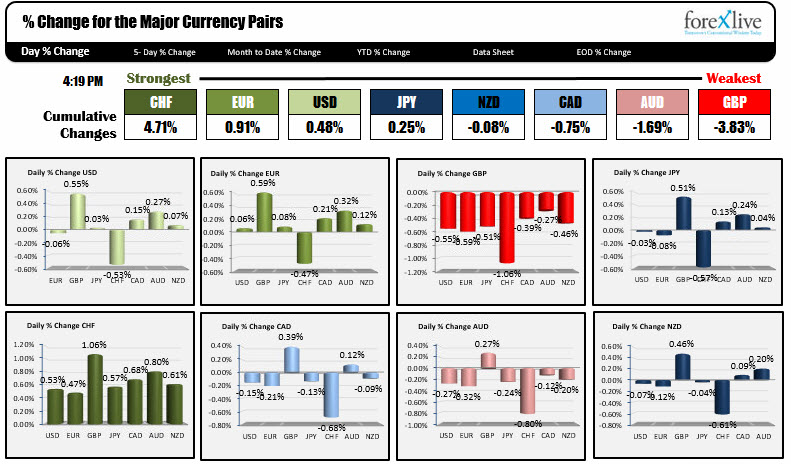 The big question for the final day of the week is “Will the real USD please stand up?”.  Will the “Bearish Dollar” stand up and those key technical breaks seen in the US morning be rebroken? Or will there be a new “Bullish Dollar” take charge and push the greenback higher?

Tomorrow…Pres Trump gives the closing speech at Davos and the US will release the 4Q GDP where growth is expected to come in at 3%.  Each should provide some more fireworks for traders.