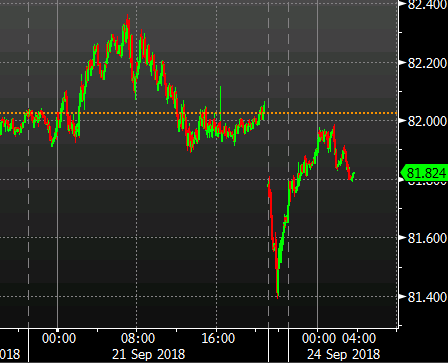 Weekend news to impact markets centred on China cancelling planned trade talks with the US this week, cancelling a visit to the US by vice premier Liu He (also scheduled for this week) and calling in the US ambassador to China to protest over sanctions imposed on an official re military purchases.

A frosty start to the week for US / China relations weighed on risk, with AUD/JPY bearing the brunt in very early Asia trade. From late Friday levels above 82 it dropped under 81.40 before retracing. As I post its around 81.80-odd.

NZD/USD fell alongside (NZD/JPY selling also) before it, too retraced.

Moves elsewhere were not so dramatic. It was a Monday holiday for markets in Japan, China, Taiwan and Korea. Japan’s absence sapped some liquidity from forex, although Singapore and Hong Kong both traded today. Note that HK is on holiday Tuesday.

EUR, CHF, GBP all had relatively minor ranges. USD/CAD was 1.2915/30 or thereabouts ahead of another week of Nafta negotiations.

But wait, there’s more … its RBNZ week too!