Making use of the Fib

Every number in this sequence is the sum of the two preceding ones. The ratios of these numbers mysteriously correspond to the proportions of things in the universe, from sunflowers to galaxies.

Long ago traders found that Fibonacci numbers and ratios can be suitable for technical analysis. Firstly, they are nicely mathematical and add a pleasing element of nerdiness. Secondly, they produce objective price reference points and thus reduce the subjectivity of analysis if used correctly.

Let’s focus on Fibo retracement levels and Fibo expansions as these tools offer the greatest merit to Forex traders.

The primary task of Fibo retracement tool is to determine the size of potential correction against the main trend.

It’s very important to use this tool correctly. Here are the rules:

When price arrives to the first Fibo level on its way, it’s expected to pause. If the countertrend pressure is too big, it breaks the level and goes to the next one. Retracement levels of 38.2%, 50%, and 61.8% are considered the most important. If the price retraces more than 61.8% of the previous move (on a closing basis), the odds are that it will reach the beginning of a trend.

There are 2 main ways to trade using Fibo retracement tool:

1. Look at the area around a Fibonacci level rather than at an exact level. There’s no pip-precision at the market.

4. Avoid using Fibos on very small timeframes. Experience shows that it works better from H1 and higher, though you can always experiment.

5. Don’t count on Fibonacci alone. Fibonacci is not a ready-made solution for trading. To increase the probability of success, use other things together with Fibo retracement for confirmation.

What combos can be there? Fibonacci retracement plus a trend line may produce a good entry point. The 200-period Moving Average that is in the same area as 50% Fibonacci retracement will be a stronger obstacle for the price. You can take profit in this area or enter in the direction of the main trend. In addition, look for reversal candlestick patterns near the Fibo retracement levels.

Fibonacci retracement can provide you not only with correction levels, but also with some targets. If the price retraces 100% of the previous trend and breaks 100% level, you can use 161.8% Fibo as the next target. 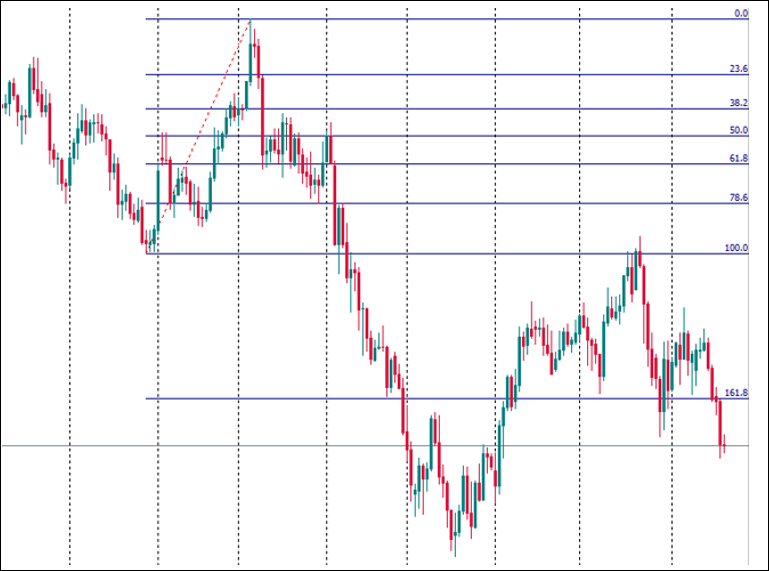 Fibonacci expansion is a separate tool. If a trend resumes after a correction to the point C and goes beyond the point B, you can expect the market to move to the point D. Its location may be found by applying the ‘Fibonacci expansion’ tool to points A, B, and C (D is the projection of Fibo levels calculated on the basis of AB from the point C). The point D is a good place for a Take Profit order.

Fibonacci tools offer a way to mathematically break price action into sectors. It’s a popular tool used by billions of market players. As a result, if you do Fibo based on a distinctive movement of the price, the odds are that many traders will do the same thing and cluster their orders around the Fibo levels. Thus the self-fulfilling prophecy will make these levels “work” for traders.

– This article was submitted by FBS
ForexLive