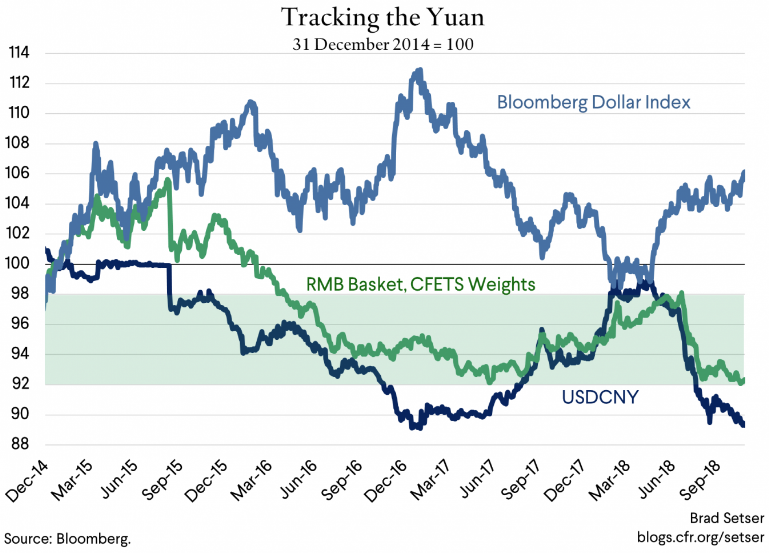 
Manage weakness or allow it to float

The Chinese yuan will be a big story into year end. It’s a two-fold problem. One is the optics of USD/CNY hitting 7.00. It’s already trading at a 10-year high at 6.97 but those final three ticks may make a world of headline difference because the optics and politics are super-charged at the moment.

Alternatively, China can emphasize that it’s no longer targeting a US dollar rate and is instead focused on a band against a wider basket of currencies. The reality is that the US dollar is independently strong; it’s the best performing major this year and its strength against emerging market currencies is even more pronounced. So USD/CNY should be no surprise, if anything it’s underperformed what you would expect given the trade war and drop in Chinese equities.

That it hasn’t suggests China is fighting to keep its currency higher. That’s not just politics, an overriding fear in China is capital flight.

As for the basket, the yuan is near the bottom of the band and in a great post today, Brad Setser looks at China’s options.

He argues that defending the lower end of the band is the easiest option but that would force China to absorb the full effect of US tariffs without any help from a weaker currency.

A second option would be to shift the band and allow a continued depreciation.

“While it is conceptually possible that China could intervene to push its currency up or down, in practice China tends to intervene to limit the scale of any market move,” he writes.

Again, the problems with that may be political.

The final option would be to allow the currency to freely float. That would offer some cover on the political side but the initial reaction would be weakness and that would quickly invite capital outflows and speculative selling. In turn, it could destabilize China and deliver a brutal hit to the global economy.

“The transition to a float would itself likely be a negative shock, one that would reduce confidence that China’s authorities can effectively control the direction of China’s economy,” he writes.

Ultimately, what happens next is less important than how the market reacts to it.

“The easiest course would be to try to soften the edge of the band, and hope that this doesn’t trigger too much pressure or risk too big of a move. But I am not totally sure a gradual expansion of the yuan’s trading band will be possible. Not with the yuan testing its post-2015 lows against the basket, and not with the yuan hoovering on the edge of passing through 7 to the dollar,” Setser writes.